I was chatting with my buddy Jeff Sipe—who just happens to be in charge of Nosler’s Rifle division—when he alluded to the new Nosler cartridge. “Did you just say twenty-seven?” I inquired. His nod affirmed I’d heard him correctly, while simultaneously piquing my curiosity, as few contenders to the .270 crown have made a serious dent in the .270 Winchester’s armor. “Let me guess, you guys have adjusted the twist rate to handle longer bullets, heavier than 150 grains?” Sipe’s grin widened, and he explained that the 27 Nosler was more than just the 26 Nosler necked up or the 28 Nosler necked down to result in a really fast cartridge; this was designed for the new 165-grain AccuBond Long Range bullet. The Nosler family of big-game cartridges are based on a shortened and blown-out .404 Jeffery case, designed to run in a long-action rifle, and prior to the introduction of the 27, consisted of the 26, 28, 30 and 33 Nosler cartridges. 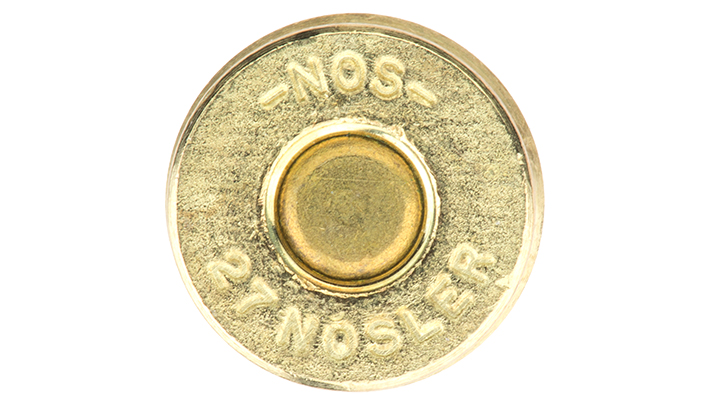 I was raised in a .30-caliber household, my Dad being a fervent proponent of the .308 Winchester, as the military version (7.62x51mm NATO) made an indelible impression on him during basic training at Fort Leonard Wood in Missouri in the late 1960s. He bought a Mossberg bolt action in 1969, and shoots it to this day. As a kid, questioning him on why he chose the .30-caliber over 7mm, .270, .338 or 6.5mm (I was intrigued by the 6.5×55 Swedish), he explained that he appreciated the diverse selection of bullet weights. “I can load the 125-grain bullets for smaller game, 165s for deer, and 180- and 200-grain bullets for bear in the Catskills.” It made sense, and I started to examine the bullet weight ranges for the varying calibers. “Dad, why does the 7mm go up to 175 grains, and the 6.5mm go up to 160 grains, but the .270 stops at 150 grains? I mean, the difference between them isn’t that much.” He mumbled something about .30-caliber being the only one that mattered.

Later in life, when the great mysteries of twist rate and bullet stability were explained to me, it all made sense. And in all fairness, I don’t think the designers of the .270 Winchester envisioned the modern, high BC bullets, or the telescopic sights we have to take full advantage of their ballistics, and that the 150-grain bullet was a proper top end for the new, speedy cartridge. The twist rate of the common .270 barrels is what precludes the use of heavier bullets; a very few of the 160-grain semi-spitzers can be stabilized, and while they’re great for closer shots, they aren’t well-suited for long-range work.

I’m not picking on the .270 Winchester, though I’m not the biggest fan, because the first-born offspring of the .30-06 (actually the .30-03, but I’m splitting hairs) is a deer killing machine, and as it approaches its centennial, the modern bullets have extended its versatility. The .270 of the O’Connor vs. Keith era is not today’s, and that argument has been settled.

One of Roy Weatherby’s early cartridges was a shortened .300 H&H case, necked to hold a .277-inch-diameter bullet. His .270 Weatherby would better the velocities of the .270 Winchester by about 150 fps. Fifty-seven years later, Winchester saw the potential for a faster .270, releasing its .270 Winchester Short Magnum in 2002. Based on the beltless .404 Jeffery, shortened to function in a short-action rifle, the .270 WSM roughly equals the velocity of the .270 Weatherby Magnum. Faster can be better, and there are those who appreciated the increased velocity, but no one tinkered with the twist rate—until now. 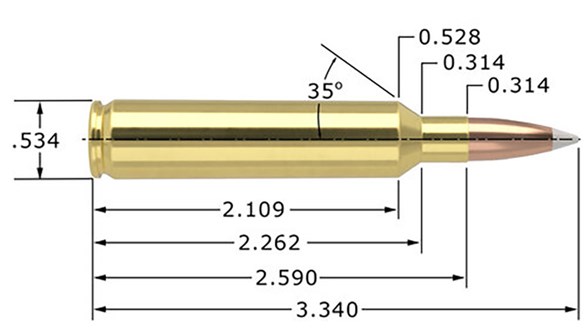 Nosler has equipped its 27 with a 1:8.5-inch twist rate—as opposed to the 1:10-inch twist of the earlier .270 cartridges—which will best handle the 150- and 165-grain bullets. The advertised muzzle velocities of 3250 fps and 3158 fps, respectively, better the velocities of either of the .270 magnums by at least 100 fps with the 150-grain bullet, and that new 165-grain AccuBond Long Range is in uncharted waters. Using a 35-degree shoulder for solid headspacing and a case measuring 2.590 inches, the 27 Nosler fits perfectly in a standard long-action magazine—it shares the same 3.340-inch overall length as the .30-06 Springfield. The datum line, or distance from base to shoulder, of the 27 is a bit shorter than the 28 Nosler, to prevent the larger 28 from being chambered in a 27 Nosler rifle.

But all these figures won’t mean a thing if the bullet doesn’t fly where you aim it. The folks at Nosler sent one of their Model 48 Long-Range Carbon rifles for testing, and it’s a fine platform for launching the 27 Nosler. With a 26-inch Proof Research carbon-fiber-wrapped barrel—threaded for a suppressor or muzzle brake—and a carbon fiber Manners MCS stock, the Model 48 Long-Range Carbon is ready to accompany a hunter into the roughest terrain, and will certainly take a beating without dragging you down. I used Talley’s excellent vertical split steel rings and bases to attach my Leupold VX-6HD 2X-12X-42mm scope to the Model 48, and grabbed both loads to take to the range. I set the Oehler Model 35P out in front of the bench, and taped the targets to the 100-yard board.

The rig was on paper without even being bore-sighted (I credit the Talley/Leupold combination; they do this often) and needed just 6 inches of adjustment to reach the bull. The Model 48 showed a preference for the 165-grain AccuBond Long Range load, with groups averaging .61 inch; the 150-grain load stayed sub-MOA with an average of .95 inch. Muzzle velocities were very close to advertised, with the 165-grain load clocking at an average of 3172 fps (with very consistent velocities) and the 150-grain load cruising along at an average of 3241 fps. The Model 48 Long-Range Carbon had no feeding or extraction issues, and the crisp trigger—which broke at 2 pounds, 10 ounces—allowed for accurate shot placement. The two-position safety, which allows the bolt to operate while on safe for safe unloading, has a positive feel, and the stock was comfortable. The nose of the comb has a flat area that tends to keep the trigger-hand thumb on the right side of the receiver; it seems to have become a popular shooting style of late, though it is not my style, possibly influenced by a considerable amount of time shooting hard-kicking dangerous-game rifles. Other than that, I found the Model 48 Long-Range Carbon to be a great rifle. Recoil was present, but manageable; I put it on par with a 7mm Remington Magnum.

The 27 Nosler is certainly a contender for the “all-around” cartridge; I feel it is suitable for anything shy of the great bears or bison in North America. Will it unseat the classic .270 Winchester? That’s going to be a very difficult task, as 95 years after its introduction there are an awful lot of good rifles—and a near-equal amount of fans—out there. I do feel that if a shooter wanted to make the move to magnum-level performance in the .277-inch bore diameter, the 27 Nosler is the logical choice, as the downrange performance puts it at the head of its class, especially with that 165-grain AccuBond Long Range bullet.